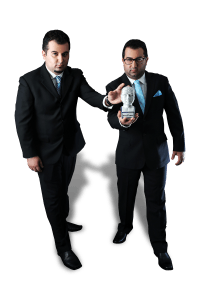 “Audience leaves with a sense of wonder!” -The Sacramento Bee

“Keen insight into human nature…mind bending brothers can get inside your head.” -The Orange County Register

“Entertainment that stimulates the mind”

Adrian & John – The Saint Twins are definitely not your typical set of twins. They capture the imagination of their audiences with their energetic and unique presentation of mental abilities they call “TSP: Twin Sensory Perception™.” Adrian & John have always been fascinated with the human mind and how it creates reality and meaning. Being twins they grew up close to each other and sharing similar interests, they started to study and read numerous books in the areas of psychology, magic, influence, persuasion, hypnosis, linguistics, intuition, NLP, statistics, perceptual manipulation, theater, comedy, ESP, acting, and verbal / non-verbal communication to create the baffling skills they demonstrate on stage.

The Saint Twins performance style is anything but conventional. They prefer to be called “Mentalist or Thought Readers.” Using no secret assistants, they work with random people and their minds to create mind-blowing and impossible demonstrations that leave people entertained and mystified. During their performance, Adrian & John communicate telepathically with each other, secret thoughts are revealed, objects are caused to move with the power of their minds and amazing predictions made before the event are revealed to be mysteriously accurate. In 2004 MTV filmed a documentary about their unique skills and their lives as twins. They were selected nationwide from over 1000 sets of twins. The show aired nationally and garnered rave reviews! While in college, Adrian caused a major stir in his community when he predicted the results of Super Bowl XL one week before the game was played and received numerous press and media attention. It caused such a stir on his campus that people accused him of having strange powers, but the only powers the Saint Twins claim are the powers of knowledge, twin intuition, and hard work.

The Saint Twins have been written up in numerous newspapers and magazines and have performed for top companies and universities such as MTV, Pacific Life Insurance, 7-Eleven, Pasadena Tournament of Roses, U.S. Department of Homeland Security, Venetian Hotel, Farmers Insurance, Wells Fargo, UC Davis, UC San Diego, Loyola Marymount University, Washington State University, Bank of the West, Chase Bank, and many more. Adrian and John are devoted life time learners and college graduates. John holds a BA in Psychology from UC Riverside (which he received in 2.5 years) while Adrian has an MBA from Argosy University and a BA from UC Davis in Sociology – Organizational Studies & Communication.

When the Saint Twins are not performing they can be found doing the normal things that most people their age do, but they truly feel at home when they are entertaining. They are unique, young, fresh, and enjoy being a brother to brother mind reading team for their brand of mystery entertainment.

Some interesting facts about Adrian & John…

2. They enjoys sports, movies, cars, music, traveling, fine dining, and the whole nine yards as much as any other sets of twins.

3. Are they psychic? No… Although, Adrian does believe there is something a little off with John sometimes.😁

4. Adrian predicted the results of Super Bowl XL 1 week before the game while a senior in college at UC Davis.

6. Favorite Movies: The Shawshank Redemption, Goodfellas, Forrest Gump, Jurassic Park, The Godfather and The Godfather Part II… there’s a Fredo in every family. 😁

8. Favorite Magicians/Mentalist: The Evasons are the best two person mind reading team in history, Derren Brown is truly amazing, David Copperfield is literally a living legend, David Blaine is whom initially got him hooked.

10. Favorite Quotes: “ You should be skeptical of everything in life, but accept the possibility of anything.” – Max Maven

“Here’s to feeling good all the time.“ – Cosmo Kramer

You won’t see any large or unusual props from Adrian & John. Instead, they work with you and your audience one on one, whether on stage or close up showcasing impossible and thought-provoking demonstrations of the human mind.

They will astonish you with mind blowing routines and ideas you never thought possible with everyday objects such as books, a deck of playing cards and pads of paper.

They will amaze and entertain you with your own thoughts!

About The Saint Twins

You won’t see any large or unusual props from Adrian & John. Instead, they work with you and your audience one on one, whether on stage or close up showcasing impossible and thought provoking demonstrations of the human mind. They will astonish you with mind blowing routines and ideas you never thought possible with everyday objects such as books, a deck of playing cards and pads of paper. The Saint Twins will amaze and entertain you with your own thoughts!